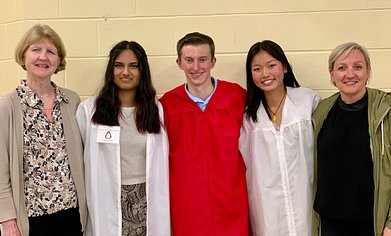 The Bedford Women’s Club offers scholarships to young men and young women who are high school seniors and residents of Bedford. Each candidate received a minimum of $1,200 that may be applied toward any postsecondary school or training program. The club is pleased to announce the following five awards.

Gavin Bolton, a senior at Kreiva Academy Public Charter School, plans to study film production in college. He has had the opportunity to work individually and in production teams to create a variety of projects.

May Zheng, the past editor of Unleashed, Bedford High School’s newspaper, is an International Baccalaureate Diploma candidate. During the summer before her senior year she completed a six-week internship through Dartmouth Hospital where she had an opportunity to explore her interest in the medical field.

Elliott Frank, a spirited and talented drum major in the Bedford High School Band, is an International Baccalaureate Diploma candidate, He wants to pursue a career in industrial engineering.

Mackenzie McCarthy, active in the Derryfield School’s Concert Choir, is a top student in a high-achieving senior class.  She plans to further her education in musical theatre.

For additional information on the Bedford Women’s Club, go to www.bedfordwomensclub.org.